Want to start trading, but simply don’t know where to begin? We’ve put together a guide on how to get started. Learn how to get into trading and get ready to trade with us.
> Education >  Triangle Patterns

These occur when a market price starts to converge towards a single point. How the triangle is formed can give an indication as to where the price will move next. There are three main types:

An ascending triangle forms as the market hits a strong level of horizontal resistance, but a series of higher troughs indicate that the price is converging towards it. This pattern usually signals that the price will move higher, but bear in mind the resistance level might be too strong, causing the price to bounce off. Generally, a sensible way to trade triangles is to wait until the pattern has formed, and then trade the breakout. 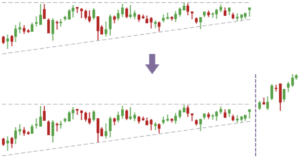 A descending triangle works in the opposite way to an ascending triangle. The market hits a level of support, but a series of successively lower peaks suggests the price will move lower. 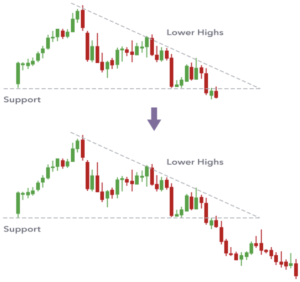 A symmetrical triangle occurs when the price appears to be converging with a series of lower peaks and higher troughs. This is a continuation pattern, which means that the market will usually continue in the same direction as the overall trend after the pattern has formed. 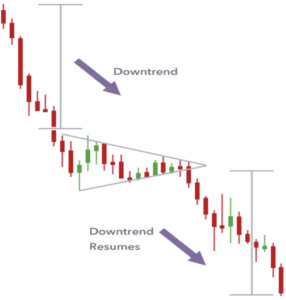 If there’s no clear trend before the triangle, the market is equally likely to break out either to the upside or downside.

Similar to symmetrical triangles, these are continuation patterns that mark a consolidation period in the current trend before the price continues to move higher or lower. After a strong move, the market will often trade in a tight range between support and resistance levels, establishing a clear rectangle shape. After that the market tends to continue in the same direction.

Not to be confused with triangles, these patterns are formed when the price of a market begins to narrow into a tight range between two sloping trend lines.

A rising wedge occurs between two upwardly slanted lines of support and resistance. In this case the line of support is steeper than the resistance line. This pattern generally signals that the price will push lower.

A falling wedge occurs between two downwardly sloping levels. In this case the line of resistance is steeper than the line of support, and usually signals that the price will rise.

Remember: chart patterns are not guaranteed

As we noted in the previous section, chart patterns are merely signals as to where the price of an asset might go in the future. With all chart patterns it’s sensible to wait until the direction of the move has been established before placing your trade.

In some cases, when a breakout looks likely, it can even be a good strategy to set orders either side of the support/resistance/trend line. Then when one of the orders is triggered, you can cancel the other, hoping to catch the breakout whichever way it goes. However, this strategy is still susceptible to fakeouts, so whenever you place a trade it’s important to set stops to limit your risk.